Is That the Giants Headed for the MLB Postseason? 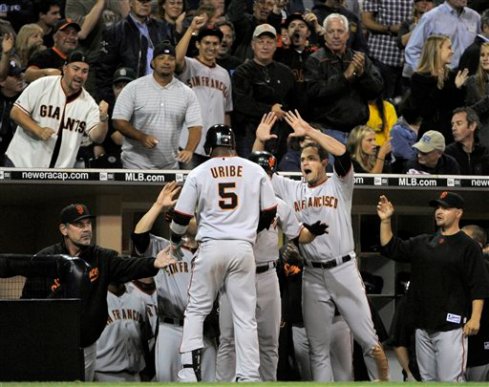 It’s usually not a smart idea to post about a team returning to the playoffs when they haven’t clinched yet, but I’m an A’s fan, so if the Giants meltdown and fail to make the playoffs, I won’t shed any tears. At any rate, I’ve got to admit I’m a little excited about the black and orange returning to the postseason for the first time since they blew the 2003 World Series to the Anaheim Angels. Now, they’d have to get swept this weekend by the Padres to force a one game playoff for the division, but the way the two teams are playing right now, that doesn’t seem likely. So let’s assume the “G-men,” as the much maligned announcing duo of Duane Kuiper and Mike Krukow call them, hold off the Pads to win the NL West. Contrary to Chappy’s sentiments, I’m pretty excited for the MLB Playoffs this year – on the NL side at least. The Phillies are pretty much a perennial postseason favorite at this point, but if things hold the way they are, we’ll see the return of the Giants, the Atlanta Braves, and most refreshingly, the Cincinnati Reds.

In all likelihood, the Giants will open the first round at home against the Braves, which should be an exciting series. Remember that the Giants knocked off the Braves in the first round in 2003 on their way to a World Series berth. But SF has the makings of a pretty dangerous playoff team. The pitching staff is unparalleled, led by Tim Lincecum of course. Throw in guys like

Matt Cain, a revitalized Barry Zito, and quite possibly the hottest pitcher in the rotation, Jonathan Sanchez, and you can’t figure them to give up many runs. On the offensive side, though not the most dangerous lineup on paper, the Giants are ridiculously deep. It’s a huge collection of guys that can come through with the big hit at any given time. Buster Posey, Jose Guillen, Pat Burrell, Aubrey Huff, Edgar Renteria, Pablo Sandoval, Freddy Sanchez, Mike Fontenot, Cody Ross, Aaron Rowand….. I could go on for days. I guess I’ll put away all my green and gold and break out that one Giants shirt I have for the next few…. weeks, hopefully.

Let's Go Oakland....clap, clap, clap clap clap END_OF_DOCUMENT_TOKEN_TO_BE_REPLACED
This entry was posted on Friday, October 1st, 2010 at 5:14 pm and tagged with Baseball, MLB, mlb playoffs, nlds, san francisco giants and posted in Sports. You can follow any responses to this entry through the RSS 2.0 feed.
« Two Quick Things…
Hand It Over Already »

4 responses to “Is That the Giants Headed for the MLB Postseason?”