If Tiger is Superman, does Padraig Harrington have any Kryptonite in his bag? 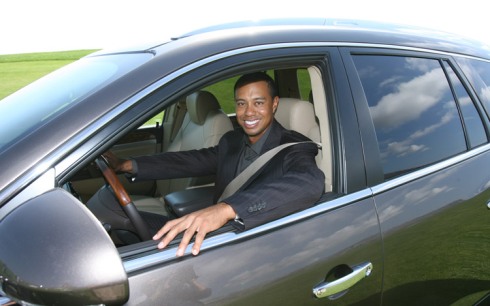 Tiger Woods drives a Buick Enclave!?! You'd think with all that money he'd drive something better!

Is Padriag Harrington the next in line on the PGA’s attempt to find a rival for Tiger? With Woods looking about ready to wrap up his 15th major, there has been a buzz around Harrington (the defending champion of the event) playing very well for a second week in a row. Phil Mickelson and all of his troubles this year hasn’t put together much of a challenge on Tiger’s thrown, but he has been in and out of golf all season for obvious family reasons. Truthfully what can you expect from Phil if he isn’t able to properly practice and prepare himself to play at the highest level. Today, Harrington was quoted saying he wanted to play with Tiger in the final group. Harrington unfortunately didn’t get his wish as Y.E. Yang will play with him in the final group Sunday. Yang actually beat Tiger when he was in China at a tournament, but I have a feeling this will be a little different. Every player that gets paired with Tiger shoots an average of three shots higher than him, so I don’t see tomorrow playing out differently. It has to be tough playing with a gallery of Tiger’s size surrounding you all over the course.

I’m all for Paddy being the next contender to Tiger though, because last weekend he was paired with Tiger in the final round of the Buick Open, and held his lead after the 15th hole lead by 1 stroke.

Not everybody is intimidated by Tiger all the time.

Tiger later stated “He (rules official) got in the way of a great battle. It was such a great battle for 16 holes, and we’re going at it head to head, and unfortunately that happened. I don’t know why we were put on the clock.”

Hopefully Paramor didn’t put them on the clock so they’d finish in time for the CBS to broadcast their rerularly scheduled program! Well guess what? They finished at 6 p.m. on the dot.

Either way I like Paddy’s confidence around Tiger, because it’s basically the opposite of nearly every other player on the tour. Harrington went on to say that he felt comfortable playing with Tiger. He feels that Tiger forces him to not take too cautious of an approach, and go for more aggressive shots than he normally would. Harrington struggled early this year as he’s made major changes to his swing. 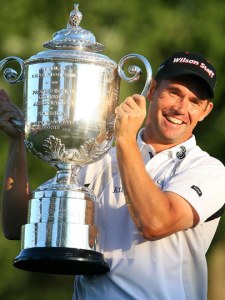 It looks like the last two weeks have shown that he is finding his groove with that new swing. If he becomes the next player to challenge Tiger, I’d like that. He seems to feel like he can win, and has fun with it the same way Phil does on the course. He may not be able to take Tiger down this Sunday, mainly because Tiger has won every tournament (14-0) that he held the third round lead in, but that doesn’t mean I won’t be pulling for him. I don’t know why, but I always root against Tiger. I guess I just like to root for the least likely outcome… Go Harrington and/or Lee!

I'm a dude that just hit 30 years old. Pretty much like everything that is funny, insightful, and has to do with the Warriors, A's, and Raiders. END_OF_DOCUMENT_TOKEN_TO_BE_REPLACED
This entry was posted on Saturday, August 15th, 2009 at 11:09 pm and tagged with 15th major, Buick Open, golf, john paramor, Major, Padraig Harrington, PGA, PGA Championship, Phil Mickelson, slow play, Tiger Woods, timed, Y.E. Lee and posted in Sports. You can follow any responses to this entry through the RSS 2.0 feed.
« Magic Still the Greatest PG to Ever Play the Game
Strasberg’s Contract Shows a Great Need to Re-do the MLB Draft »

One response to “If Tiger is Superman, does Padraig Harrington have any Kryptonite in his bag?”