Rickey Says Nobody Can Wear 24

Rickey Henderson is getting honored for his services in Oakland as the Athletics will retire his number 24 in a pre-game ceremony on August 1st. (Catcher Kurt Suzuki already switched from 24 to 8 at the beginning of the season) Rickey is also a very deserved first ballot for the Hall of Fame inductee this year, and got in as easy as it was to tell himself that he was the best (with 94.8% of votes). I’m already excited for his induction speech that will fall on July 26th! Rickey was my favorite player growing up.

I even bought those ridiculous neon green Mizuno batting gloves, and practiced the snatch catch in my little league days. He played 14 of his 25 seasons in Oakland wearing green and gold for most of his prime including his lone MVP season. It’s only fitting that they retire his number, as he was arguably the greatest leadoff hitter of all time and always an Athletic at heart. It will be a long time until we ever see a player that can steal bases and hit for power (81 leadoff homers the MLB record) from the top spot in the order.

His induction to the Hall of Fame on January 12th could be one of the last first ballot players to make it for awhile with the steroid cloud looming over many of the players that will become eligible in the upcoming years. Rickey will be remembered for his cocky attitude and strong opinions that made him the fun player he was on and off the field. A reporter once asked Henderson about Ken Caminiti’s estimation that 50 percent of Major League players were taking steroids. His response was, “Well, Rickey’s not one of them, so that’s 49 percent right there.”

His constant self appraisal from the third person is always entertaining, “Listen, people are always saying, ‘Rickey says Rickey.’ But it’s been blown way out of proportion. People might catch me, when they know I’m ticked off, saying, ‘Rickey, what the heck are you doing, Rickey?’ They say, ‘Darn, Rickey, what are you saying Rickey for? Why don’t you just say, ‘I?’ But I never did. I always said, ‘Rickey,’ and it became something for people to joke about.”

“Do I talk to myself? No, I just remind myself of what I’m trying to do. You know, I never answer myself so how can I be talking to myself?” 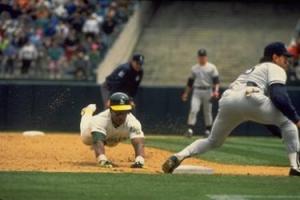 His stats speak for themselves as he is on top of some of the all time lists:

I hope you tune in to his HOF induction and number retirement ceremony, because I’m sure his speeches will be classic!

I'm a dude that just hit 30 years old. Pretty much like everything that is funny, insightful, and has to do with the Warriors, A's, and Raiders. END_OF_DOCUMENT_TOKEN_TO_BE_REPLACED
This entry was posted on Friday, July 10th, 2009 at 12:50 am and tagged with 24, all time, athletics, Baseball, bases, great, Hall of fame, MLB, Oakland A's, quotes, records, retired, Rickey Henderson, steals and posted in Sports. You can follow any responses to this entry through the RSS 2.0 feed.
« The New Salary Cap Kills Dreams, and Gives Other’s Hope
Who Else Wants Our Chicken Feet? »

4 responses to “Rickey Says Nobody Can Wear 24”