Did the Rangers and Mariners Get Better? 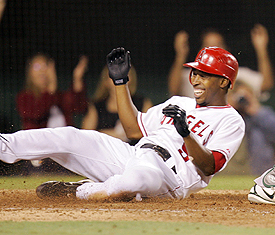 So the winter meetings are over, and there were two teams that made a few noteworthy moves in the AL West. Chone Figgins signed with the Mariners. Interesting move, now they have one of the best leadoff duos you could possibly have pairing Figgy with Ichiro. Maybe they’ll set some kind of record for double steals, or not, since Ichiro seems to be stealing a little less than he once did. They were reportedly thinking of re-signing Adrian Beltre, which sounds like a retarded idea, and would put a black hole in the lineup right after two on-base guys. The only way this deal will make them better is if they get some consistent power behind the two. Maybe Lopez will have a huge year and they could put him higher in the order. Maybe Griffey can have one last magic season for them, but looking at his stats from last year, I don’t see that being very likely… Side note, I am happy to see that he is going to play one more year, good for him! He’s the anti-Bonds, and it’s good to see he can still get some work past his prime. 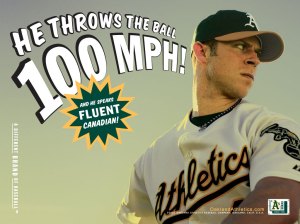 The Rangers also made a couple moves signing one of my favorite love/hate players on the A’s over the past decade in Rich Harden. I love the way the guy pitches, and he CAN pitch, even Nolan Ryan is impressed by the guy, but hate how he is never healthy enough to pitch more than 100 or so innings. Supposedly he’s trying to make it to 200 innings to get a bunch of incentive money, but I’ll believe that when I see it! Dealing away Kevin Millwood’s elephant contract should allow them to sign a couple of guys at a much better price. Sounds like they have an interest in Mike Lowell as well. The Rangers weren’t bad last year, they just fell apart in the end with a mix of injuries and bad play.

This is the Angels' window.... shutting.

Sure, I’ve called myself Nostradamus before.  It’s too bad our blog is so young, because I’d love to go back and audit all my predictions, such as declaring Jamarcus Russell a bust when the Raiders selected him first overall.  However, since we can’t talk about the past, allow me, if you will, to explain what’s going to be set in motion tonight.  The Angels will lose another post season series, this time at the hands of a tremendously overpowering Yankees squad.  I’m not just predicting a loss, though.  I’m predicting the beginning of the end for the Anaheim Angels current “dynasty.”  Much like Sacramento Kings fans will remember Chris Webber’s fateful knee injury during their Western Conference Semifinal series against Kevin Garnett’s Minnesota Timberwolves as the moment that kicked off the demise of the Sacramento Kings, the conclusion of the Angels’ season tonight will trigger a downward spiral for years to come.

At the center of the issue is the decline of Vladimir Guerrero.  Although he’s only 34, he looks like Wilfred Brimley stepping to the plate.  The Angels will have to address the issue of whether or not he’s going to continue to be the man in Orange County.  As a result, if you take Vlad out of that lineup – or perhaps even if you leave him in there – the offense looks pretty suspect.  It remains unclear, also, if Bobby Abreu will be in their plans.  Across the infield, Howie Kendrick appears to have hit his ceiling, and Chone Figgins can’t be getting any faster.  Kendry Morales should be a mainstay at first, but I don’t see him having a Tim Salmon-like career in Anaheim.  There are no question marks when it comes to the pitching staff, however, as Lackey, Saunders, Santana, Kazmir, and Weaver should hold down the rotation for years to come. And although the organization is usually deep on pitching, there’s a lack of offense in the Angels’ system right now.  Once a heralded prospect, Brandon Wood has pretty much settled into the role of AAAA star.

Vlad takes a breather between pitches.

What I envision happening tonight, on a greater scale, is a fan base realizing that their team has already peaked, and won’t remain in contention much longer.  Unless they bring in a few big ticket names next season, which I’ll admit is a possibility, fans won’t have much to be excited about, knowing their window is all but shut.  Let’s be honest, how many Angels fans even existed before 2002?  Although it can be said that owner Arte Moreno’s deep pockets will keep the team competitive, waning attendance could prove too much for the franchise to handle.  I’m not saying the Angels are going to fold in the next few years, but just don’t expect to see them in the same position they are tonight for a while.

UPDATE: I really didn’t see the Angels hanging on in this one. Check back here next game.