I haven’t written about the Warriors all year, because like the old saying goes, if you can’t say anything nice, don’t say it at all. When Mark Jackson and the W’s front office promised the playoffs at the beginning of the year, I thought whoa, easy on the promises, do they know what franchise this is?!? I actually wanted them to stand pat this year and see what they have instead of making a hasty trade for Dwight when he said wasn’t going to stay in the Bay Area. Fortunately they didn’t gut the team for him, because I feel like they have a solid core of young players (4th youngest team in the league). Unsurprisingly, they haven’t looked like a playoff team especially going 5-10 in games that were decided by 3 points or less. Regardless of what they have or haven’t done this year it’s culminated in the biggest trade of the seemingly not so interesting trading deadline this year. Shortly after hearing about the Warriors trading Monta, Udoh, and Kwame for Bogut and Jackson I was admittedly mad. I chewed on it for a little while, digested it, slept on it, now I’m ready to poo out my real thoughts on the trade.

Monta Ellis – I think the only reason I was mad is because Monta was the only one on the team that makes those exciting hold your breathe types of plays on the team. Unless you count every time Curry makes a cut on his seemingly always broken ankles. Every year Ellis has been in the NBA he’s gotten better, and added something to his game. He will be greatly missed in Warriorland, and I want to thank him for all the highlight reels and game winners he made for us. I’ve always felt he should get more calls from the refs than he does, but he’s so quick maybe the refs can’t see the contact. He also should’ve been an All-Star at some point, but now that he’s in the East maybe that will finally happen. The most exciting part about him leaving this year is going to be seeing what rookie Klay Thompson can do. He’s already looked great in the limited minutes he’s been on the floor, but being Monta’s backup doesn’t really get you that many minutes. Now with a full time run, we’ll get to see what kind of shooting guard we drafted, and if he is indeed the all around player we think he can be.

An Actual Bold Move for Basketball Reasons – I think the part that riled me up a lot yesterday was that we put Udoh in the trade, and got back Stephen Jackson instead of someone useful like say Ersan Ilyasova.  Udoh was finally healthy and showing the promise that made the Warriors pick him in the draft two years ago, but if that was the breaking point for the deal then I’m okay with it, because it’s a bold shake up. For first time in a long time, it’s clear the Warriors have a direction. They’re usually stuck in suck mode, but not sucky enough to get a good draft pick or make the playoffs. I’m actually for them sucking the rest of this season, because in this lockout shortened back to back game fest, I didn’t see them coming out of it well. If that meant trading away our biggest trade chip for a true center that the Warriors haven’t had on their roster since before I was born, so be it. This might be one of the first times I’ve been impressed with the new owners. They made a move that wasn’t fan popular (trading away the most popular player doesn’t usually get a good reaction from fans), isn’t a PR move, it’s not payroll/cap driven, and it definitely wasn’t ticket sales driven, because who will really want to watch this team the rest of the way especially if they shut Curry down like they should. They delayed being any good the rest of this year to possibly be a lot better in the future with a much more traditional lineup. I can’t commend them enough after years of head-scratching trades whether it works out well or not. This trade hasn’t been positive yet, but you can tell they’re putting together some kind of plan, which is a first time since Mullin was our GM that it seemed like we have a plan. Plus, the value for Ellis wasn’t as high as Bay Area fans thought. Yes, he’s a great player, but sometimes he was a black hole, couldn’t guard bigger SG’s like Kobe, and being undersized isn’t overly attractive to every team.

Warriors New Frontline – I can confidently say David Lee has been more important than Monta this season, and probably more consistent on a nightly basis. Putting him next to a hopefully healthy Bogut gives them the frontline that can compete with the large frontcourts that every other team has in the west. It will also make Lee that much better not having to do all the scoring down low, and will also prevent him from having to guard centers half the time when Biendris is in his usual foul trouble. Then there’s the fact that we actually have a true center opposed to guys like Foyle, Dampier, and Biendris. Come to think of it, I can’t remember being excited about their center since Manute Bol was on the team. Bogut also gives them that defensive anchor that Mark Jackson really needs to have to make this a strong defensive team. I have to admit I did keep Bogut one year in my fantasy basketball league, so I fully understand his upside, especially being in his prime at 27 years of age, and they will have control over him for three years compared to Monta’s two years (Monta had said he’d probably exercise his players option after next year to become a free agent). Bogut just needs to stop having the freak accidents to make this trade worthwhile for the Warriors. I’m not sure we can truly evaluate the trade until we see him play next year, so the jury is still out. I was pretty happy to see how mad some of the Bucks fans are about losing Bogut in the trade.

They might be bad enough to keep their draft pick – This trade also gives the Warriors some hope of keeping their draft pick this year. If you didn’t know, the Warriors traded their first rounder in this years draft for Marcus Williams to NJ back in 2009, who played a whopping nine games for them. That pick was then traded to Utah in the Deron Williams deal. The only way they keep the draft pick is if they lose their way to the worst seven in the league, since the pick is top seven protected. If they do suck their way into keeping their pick, then it would roll over to the next years draft, where it’s only top 5 protected. Even if they are the 7th worst team, there’s no guarantee they’ll get the 7th pick because it seems like every year at least one team leap frogs them into the lottery, and pushes them back a pick. They’re already better than a lot of the Eastern Confrences bottom feeders, so one can only hope. Despite last nights trade inspired performance from the Dubstitutes, they only beat Sacramento team that is just plain bad this year. I’m sure with one of the toughest schedules left in the league (something like 11 or 12 back to backs left) they will have a prolonged losing streak giving them a shot at keeping their draft pick, and at the same time get a good look at their young players. My hope now is they just let Curry rest so he doesn’t keep re-injuring those ankles, and lose their way to keep their draft pick. 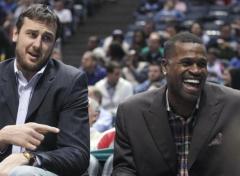 Stephen Jackson is back – I have a hard time seeing where Jackson fits into the Warriors roster at the moment, but Dorrell Wright has been a disappointment this year. He was a cancer towards the end of his Warriors days, but maybe after getting out of Milwaukee with a coach he couldn’t stand will get his head right. Plus, he did give us Warriors fans a lot of good memories in a franchise that produces few. I thought they might try to flip him right away for something more constructive to the future of the team, but it sounds like it takes 48 hours for the trade and physicals to go through, so that will be after the trade deadline passes, unless he reports early, which I don’t see happening. I’ve read they’ll either trade him after the season or buy him out when the season is over. If that doesn’t happen at least Jack will eat up some salary cap so they don’t make a ridiculous offer to some free agent this off-season. I also wouldn’t mind holding onto Jack next year when he’s in a contract year with something to prove, so he can get paid. I’m just glad Rowell isn’t around to negotiate a new contract with him or we’d probably end up with Jack until 2020 at $10M per year hoping for We Believe 2.0.

I'm a dude that just hit 30 years old. Pretty much like everything that is funny, insightful, and has to do with the Warriors, A's, and Raiders. END_OF_DOCUMENT_TOKEN_TO_BE_REPLACED
This entry was posted on Wednesday, March 14th, 2012 at 12:07 pm and tagged with Andrew Bogut, basketball, draft pick, Epke Udoh, golden state warriors, milwaukee bucks, Monta Ellis, NBA, stephen jackson, trade and posted in Sports. You can follow any responses to this entry through the RSS 2.0 feed.
« Minnesota Matters
Boo’s, Sapp, and Bounty »