Chappy: The dream season continues as I had another good weekend of picks. As I said in my post Wednesday, I didn’t get to see much football over the weekend, but did hear and read plenty of analysis to know what happened to help me with this weeks picks. Let the good times keep on rolling!

By:  Got my ass kicked last week.  Time to exact some revenge!  To the lines ~

Chappy picks Pittsburgh (-12). Pittsburgh has been an iffy pick on some weeks this year, but aside from the game against the Colts, they’ve beat teams they are supposed to convincingly. I’m not sure I believe in Blaine Gabbert much at all, especially with the limited amount of weapons he has outside of MJD. The Steelers will knock him over a lot forcing him into some turnovers. I read somewhere Mendenhall is supposed to be back, so that should only help the blowout cause.

By picks Philadelphia (-1).  I thought last week would be when the Eagles finally showed what their capable of, and to a certain extent they did, nearly coming back against the Bills on the road.  Unfortunately it’s been like Groundhog’s Day for Philly, as they seem to repeat the same mistakes over and over again.  I know Mike Vick has shed the “Dream Team” label, but they do share resemblance to another “Dream Team” in a way, the Miami Heat, and not all was smooth sailing for that team.  But, the Heat did eventually get it right.  I assume the Eagles will get it going now, as they’ve wasted their life lines already.  Throwing records aside, if the Eagles can’t beat this suspect Redskins team this week, they can kiss the playoffs goodbye.  I don’t see Philly missing the playoffs, quite yet.

Chappy picks Carolina (+4). Cam returns to his homeland of Atlanta. If there’s one thing I’ve taken from this Panthers team is that they don’t get blown out. The one time they lost by more than three points it was by seven to the defending Super Bowl champs. The Falcons are saying all the right things, but don’t seem to be executing them well enough to get them put into the upper echelon of teams that they were in last season.

My question for this team is has their window already closed? Seems like they’re pretty old at some of the skill positions like Turner, Gonzalez, Babineaux, and Abraham all over 30. I still think Atlanta wins, but Cam and the Panthers hang tough like they have every week this year.

By picks Atlanta (-4).  I’ve been a huge supporter of Cam Newton and Carolina when making my picks this season, and they haven’t let me down yet.  But, I’ve been an even bigger supporter of Matty Ice over the past few seasons, especially at home.  Obviously, the Falcons have not looked good coming out of the gates this season, considering they held the best record in the NFC last year, but this is still the same dynamic team as a season ago.  A team like this is due for a breakout game, a game that will remind the census that they are still a legitimate championship contender, and this will be that game.  Cam has been remarkable thus far, and is running away with the ROY votes, perhaps even swaying some MVP ones, but there’s only so much one guy can do to keep his team close in every game.  I sense he slows down a little this week, hits a small speed bump on the road against a division rival.  Atlanta wins this game by 14.

Chappy picks Buffalo (+3). I think everyone is wondering when this Buffalo team will fall back to earth. I feel like they will eventually, but for the time being they believe in themselves, which is nearly always the most important part of a team. The Bills always seem to come through in the clutch, and well, the Giants seem to find ways to fall apart in the clutch over the past year and a half. The Giants haven’t really played anyone I deem a good team this year, and the Bills have plenty of quality wins, so it’s an easy choice to take the points even for the road team.

Chappy picks Oakland (-6.5). Obviously I’ve been ecstatic about how well my Raiders have been playing, and the schedule is getting a bit easier over the next few games than it was to start the season. Not to say Cleveland can’t beat Oakland, but the line says what we should expect, a win. I am slightly concerned the players will be a little too pumped up costing us some stupid penalties, which could help the Browns stay close. One of the most encouraging things this season is the Raiders seem to have found a way to not have a let down that effects their next game. Where are all those haters that thought DHB would never be as good a receiver as Crabtree on draft day in 09? Crickets out there, that’s what I thought! I don’t feel entirely comfortable picking them to win by a touchdown, but with all the issues in Cleveland with Peyton Hillis, I don’t see how that wouldn’t be a big distraction. 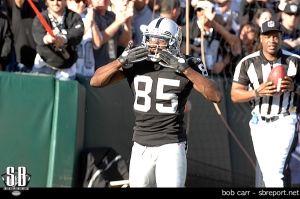 Colt McCoy has been impressive imo, but he’s going to have a tough time throwing over the Oakland D-line that is the best he’s faced this year. Cleveland gets swallowed by the Black Hole.

By picks Oakland (-6.5).  Shout out to Chappy & Matt, I’m really feeling this Raider team.  Jason Campbell is playing a well controlled, well-disciplined game this season, and he’s utilizing the talent he has on the edges.  Oakland’s receivers are a threat to break on every single play.  Toss in the league’s best running back in DMac, and the Raiders have an exciting brand of offensive football this year.  But you can’t overlook the Raiders D.  Along with my Niners and the Baltimore Ravens, the Raiders have one of the most physical and intimidating defensive units in all of football, add to that Sea Bass kicking 50 + yarders with a hot dog in his hand, and I’d say the Silver & Black have a good thing going for them all around.  Plus Cleveland’s coming in already terrible, and with a disgruntled star in Peyton Hillis.  That doesn’t add up well for the Browns.  Oh and by the way, the “Madden Curse” still lives.

Chappy picks New Orleans (-4.5). I’ve picked New Orleans to cover the past four weeks, and they’ve come through for me in all but one. Seeing how the 49ers and Alex Smith completely dismantled the Bucs defense last week, it has to have Drew Brees salivating for this match up. Sure the Bucs will change a couple things, but how much can you really change in a cover-2 scheme in one week? Not enough to stop Drew Brees from putting up 40+ points. Do I think the Bucs can keep up on the scoreboard? 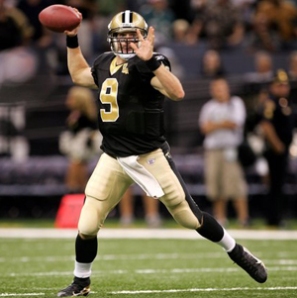 Maybe if they have a huge game from Earnest Graham controlling the clock, but I don’t really see that happening, so I feel pretty confident in picking the Saints.

By picks New Orleans (-4.5).  I feel that lost in this season thus far, is how good the Saints are.  They lost a nail biter on the road in the season opener against the defending champs, and best team in football, Green Bay Packers.  Since then, they’ve reeled off four straight wins and are pulling away from the division.  Drew Brees might be the MVP if Aaron Rodgers and Tom Brady didn’t exist, he’s turning Jimmy Graham into a house hold name!  Anyway, long story short, the Saints are too explosive offensively, and the Bucs seem anemic on their end.  No LaGarrette Blount and -4.5 seems like a bargain here.  Saints big.

I'm a dude that just hit 30 years old. Pretty much like everything that is funny, insightful, and has to do with the Warriors, A's, and Raiders. END_OF_DOCUMENT_TOKEN_TO_BE_REPLACED
This entry was posted on Friday, October 14th, 2011 at 11:27 am and tagged with football, lines, match ups, NFL, predictions, Spreads, vegas odds, week 6, weekly picks, winners and posted in Sports. You can follow any responses to this entry through the RSS 2.0 feed.
« Doin ALCS Thoughts…
Campbell Conundrum »