Let’s Change Baseball Because One Guy Got Hurt 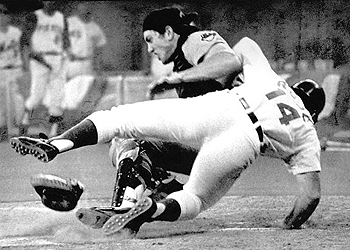 I really don’t know why this is a debate right now. I thought it was just homerism as I listened to Giants play-by-play man Duane Kuiper whine about Buster Posey’s collision last night. Add to that, Posey’s agent sent a memo to MLB pleading to ban home plate collisions. But when I saw Buster Olney pleading his case for the change, I knew it wasn’t just local sentiment. Unless he’s just trying to protect a fellow Buster, I don’t know why he’s on this bandwagon. It’s classic American knee-jerk reaction to something that happened once out of a thousand times. What’s next, banning talking on cell phones while driving? Oh, wait a minute… Anyway, the last home plate collision I can remember that left a catcher significantly injured was Ray Fosse in 1970-i don’t even know because I wasn’t alive. It’s NOT that serious. What IS serious is Posey’s injury. Now, I’m no Giants fan, but I root for them about 150 games per year. I spent the greater part of a decade living in San Francisco, so I definitely want them to be good, but I never really forgave them for blowing the 2002 World Series. I certainly will never forgive them for winning the 2010 one. Now that they’re up to three-less championships than the A’s, I don’t want them to get any closer. On the other hand, Buster Posey is the catcher on my fantasy team, and more importantly, probably was going to be a major piece of my team’s future. Now I have to decide if he’s worth a roster spot just for the sake of keeper consideration. (I might have to let go of Strasburg, ha.)

What makes my perspective unique though is I never saw the collision before I heard all the hullabaloo. I first learned of it this morning reading the game recap on my phone while doing something that starts with an S, and isn’t showering or shaving. Like the baserunner, Scott Cousins said, it was the go-ahead run in the 12th inning. He had to do whatever he could to score. However, before saying my piece,

I decided I had better watch this play finally. I was surprised to discover that it seems running into Posey WASN’T, after all, necessary. That collision had all the makings of your typical small guy complex. Cousins isn’t that small per se, but it looked like a kid who’s been bullied his whole life that was about to get back at everyone who ever picked on him by mowing down a defenseless super star. Apparently Cousins played at the University of San Francisco while I was there, and claims to be a Giants fan. Well, I never heard of Scott Cousins until yesterday, so that’s saying a lot. USF is a small school – everybody knows everybody. So to not know a guy who would go on to play major league baseball is saying something. I guess the only way he could get the City’s attention is by blindsiding the Giants star catcher. Well congratulations, kid. You got SF’s attention now. Just don’t plan on ever coming back.

Let's Go Oakland....clap, clap, clap clap clap END_OF_DOCUMENT_TOKEN_TO_BE_REPLACED
This entry was posted on Thursday, May 26th, 2011 at 6:26 pm and tagged with buster olney, buster posey, home plate collision, pete rose, ray fosse, san francisco giants, scott cousins and posted in Sports. You can follow any responses to this entry through the RSS 2.0 feed.
« RFP Of The Day: Dan Quisenberry
Hopkins Found the Fountain of Youth »