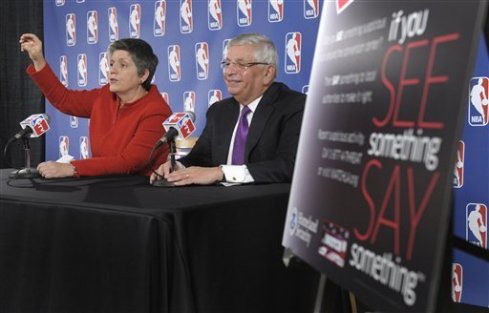 Alright, this has gotten out of hand. Enough is enough. I just stopped by espn’s nba page and 4 or 5 of the ten headlines were about contract buyouts. This is my boiling point. My frustration has mounted enough to warrant a Doin Work rant. It all started when the NBA began requiring that all trades need to be within 10% (I believe) of each other’s matching salaries. A few years later it got to the point where teams weren’t even swapping comparable talent. Expiring contracts were all of sudden worth more than good players. NBA franchises are supposed to be run like businesses, so why would your business strategy ever be to hire older guys who are close to retiring and can only perform at a fraction of their prior productivity level. Sure, you want the money to come off the books, but you still have to hire someone in their place. Sure, you save a couple bucks, but what’s the point, you’re surely overpaying a few guys on your team, and guess what… you’re going to do it again. Now, though? NOW…. teams aren’t even keeping the guys they’re getting in trades!! Instead, the trade deadline has really just come to be the day before the league’s BUYOUT deadline, where teams can have their crack at a fresh crop of savvy veterans who can help them in their postseason runs. Guys like Troy Murphy and Mike Bibby are available, all because their former teams gave away decent players to buy them out. The Warriors gave up Brandan Wright and Dan Gadzuric for Troy Murphy (and then not) and a 2nd round pick. Those guys are far from all-stars, but Wright is the guy they traded Jason Richardson for the rights to, essentially imploding the We Believe team immediately after the great upset of 2007. (Imagine that, a rant about ridiculous trades has ultimately led me to the Warriors…)

So Murphy is rumored to be ending up in Miami, as is Bibby. Something doesn’t seem right about this. I’m not talking about Miami getting these two guys, they’re not going to get them a ring or anything. I’m just talking about teams trading a decent player to a better team, subsequently waiving the newly acquired player, and then that player signs with a contender. Or we’ve also got the Hornets and Kings trade that Mark Cuban pointed out. The Hornets were recently taken over by the league to help re-stabilize the franchise to make it a more attractive investment, but their first trade is a move to take on salary? They gave up Marcus Thornton, who was making $10 an hour, for Carl Landry, who’s owed about $3 million. I give them credit for making a good personnel move, but taking on salary doesn’t seem like a wise business decision. Perhaps the worse business decision from the Kings’ side though. Already struggling to attract fans in a one-sport city, they traded away a guy who was the league’s best 6th man when they acquired him, for Thornton, who has some great potential, but isn’t exactly going to convince fans to come out. Teams these days are putting crap on the table and getting mad when the fans don’t eat it. Something has gone terribly wrong.

So I’m looking forward to the offseason. I love the sport of basketball, but the NBA has by far become the kookiest sports league on Earth. Whatever they all end up agreeing to can’t be worse than how it already is. I can’t even began to comprehend how unnecessarily overcomplicated they’ve made it, but so many moves make so little sense. They need to tie in the D-League, so teams can at least get some “prospects” in return.

Let's Go Oakland....clap, clap, clap clap clap END_OF_DOCUMENT_TOKEN_TO_BE_REPLACED
This entry was posted on Monday, February 28th, 2011 at 8:35 pm and tagged with basketball, buyouts, lockout, NBA, trades and posted in Sports. You can follow any responses to this entry through the RSS 2.0 feed.
« On Second Thought, The Jazz Got The Better Of The Deron Williams Trade
Sterling and Sheen »