Tiger is Being Tamed by his Age 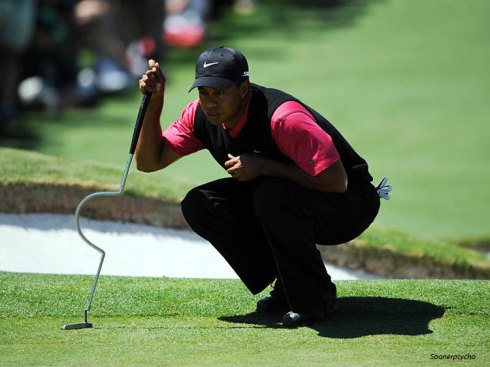 Awhile back I wrote that I was hoping Tiger Woods wouldn’t break Jack’s record of 18 total majors won. I’m feeling a little more confident of that semi-prediction after seeing Tiger go 0 for 3 in majors so far this year with some of his favorite courses (Augusta, Pebble, and St. Andrews) lined up for him to win, err, lose. We thought he might be holding all four championship trophies by the end of the year, but now we will probably be surprised if he is even holding one. Will he ever win another major again? Ok, that’s probably a bad question, since I’m sure he’ll win at least a couple more over the next decade, but at St. Andrews we saw him do something he’s never done throughout his entire career; question his abilities. For the first time in over a decade of dominance he changed his putter just before the tournament and opted for a Nike putter over his trusty Scotty Cameron, and then on Sunday, he inexplicably changed back to his old trusty Scotty Cameron. It was like Lebron’s choice to make his decision on national TV. Well thought out, but ultimately a bad idea. Does this mean Tiger is starting to blame his equipment for his deficiencies on the course? Is this a sign that he isn’t confident in his abilities, and is looking for new equipment to make up for it? Nearly every guy on the tour changes their swings and equipment to get better, but we never have heard about Tiger changing his trusty putter that sunk everything within ten feet at every critical moment throughout his career, so I’m thinking he’s starting to doubt himself at least a little for more reasons than just the putter switch. END_OF_DOCUMENT_TOKEN_TO_BE_REPLACED