Maybe it’s no coincidence that the NBA Draft falls on June 25th this year, which happens to be my birthday. Since I’ll be getting crushed at a bar Thursday with my iPhone out, watching each pick unfold, and then going home and watching it again on DVR I figured I might as well come up with a mock draft. So, let’s get started………

Los Angeles (Clippers) #1 Blake Griffin: What can we say about this pick? Nothing really, it’s the brain dead easy choice in a parity driven draft. What we’ll be writing about it in a few years is anybody’s guess, especially with the Clippers landing the golden ticket. My hunch, Griffin is a three or four time all-star by the time his career is over. If he can achieve that in a Clippers uniform, then this is the best thing to happen to the organization since Don Sterling died….wait……never mind.

Memphis #2 Hasheem Thabeet: Speaking of the Clippers, I think the Grizzlies are the “New Clippers” of the NBA if that makes any sense. After GIVING away Paul Gasol last year, you have to wonder what motives this team has to field a quality product. Anyhow, the front line is the worst in the NBA, and the Grizz haven’t had any success with their other Spanish players (Gasol & Navarro), touching another doesn’t seem plausible. Thabeet and his 153lbs shot blocking force seems like the easy pick here.

Oklahoma City #3 Ricky Rubio: Who knows what happens here. Sam Presti is a genius, and will take in every scenario before pulling the trigger on anything. The back court is young, dynamic, and flexible. Rubio seems to fit the mold of an upside-rich player who will have time to grow as the team continues to build over the next few years. Side Note: a trade here is very possible for a team that may have an offer which includes a veteran and salary cap relief.

Sacramento #4 Tyreke Evans: “It was a man beating up boys.” Strong words coming out of Sacramento…especially with the likes of Flynn and Curry he was apparently dropping whoop ass on. Evans strikes me as the type of player who gets drafted with little hype and immediately kills it in the NBA, leaving everybody saying “why the hell didn’t we see this coming.” I love this pick much more for the Kings, who don’t seem to have a situation that allows Rubio to mold his game into NBA form in the near term. Kings fans should be happy if this pick pans out.

Washington #5 James Harden: First things first, Washington trades this pick. But for simplicity (and because I’m not a wordsmith like Bill Simmons) we’ll just select Harden. I don’t have much to say about Harden….I’m totally at a loss after his NCAA Tournament showing, and I can’t shake his final game from my mind. I’m guessing the Wizards can’t either to be honest. His overall skills and ability can’t be argued however, and he makes a nice addition to the Wizards back court. Nick Young may not be the long term answer at SG anyhow.

Minnesota #6 Jonny Flynn: Flynn has been making waves in pre-draft work outs, and I can’t see him slipping very far. He may not be the best fit for Minnesota, but I think he has convinced enough GM’s that letting him slide would be at their own risk.  He’s a ballsy East Coast point guard, who has the skills and moxy to step right in and be a leader. No other PG is on the table with so few questions (ie. holiday, Jennings).

Golden State #7 Stephan Curry: Cloudy times in Golden State, with Larry Riley taking over the helm for Chris Mullen in the front office, and Monta Ellis apparently speaking out that he wants to be the lone ranger at point guard or risk demanding a trade. If the Warriors were to take the easy way out, Jordan Hill from Arizona slides in here. But this is Golden State we’re talking about!! Despite Curry refusing to schedule work outs with the Warriors, his leverage to avoid getting drafted here is nil. Tons of buzz, deadly outside shooting, and an identical player to Ellis makes drafting him impossible to pass up for the always entertaining Golden State Warriors (oh and his gun slinging tendencies make Nelly want to break out another twelver of bud light).

New York #8 Jrue Holiday: I’m not sure who is more distraught here: Stephan Curry or the Knicks! Having said that, New York must immediately shift there focus to the remaining young point guards left on the board. Despite Holiday’s struggles at UCLA, he showed flashes of amazing skill, and it became obvious later in the season that Ben Howland’s system was reining in Holiday far too much. The fast pace, open floor offense of D’Antoni’s makes Holiday a better choice then Brandon Jennings, who lacks some of the physical attributes of Jrue. Not an ideal situation for the Knicks, but still a solid upside pick nonetheless.

Toronto #9 DeMar DeRozan: With Anthony Parker and Shawn Marion approaching free agency in July, addressing the wing position seems like the most realistic direction. Let’s assume Parker re-signs, and Marion walks shall we? Bringing in an offensive scorer at the two guard spot seems ideal, and DeRozan looks like a pretty good fit. His overall game is still extremely raw, but no other pick really jumps out here. An outside chance exists that the Raptors take Jordan Hill instead based on just the value of his slide, but not likely.

Milwaukee #10 Brandon Jennings: Ramon Sessions is a free agent this summer, and Luke Ridnour is not the answer in a full time role. Brandon Jennings is a great fit here, especially if Sessions bolts for more money elsewhere. Milwaukee would also be a low key franchise for Jennings to play as he adapts to the NBA. Although his struggles overseas were well documented, he may posses some of the greatest upside and flash in the draft. Picking him on the back end of the lottery is a low risk situation for the Bucks, and a great fit for Jennings. 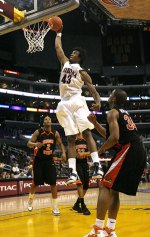 New Jersey #11 Jordan Hill: Rod Thorn, the Net’s GM has been very public in his desire to draft a forward and get a bruiser in the process. I’m not sure Hill qualifies as any sort of enforcer at the NBA level, but his skills and size certainly outweigh  the other limitations of say Tyler Hansbourgh. Hill and Lopez would actually be a solid young core at center and power forward, on both sides of the ball. This could be back to back draft coups for New Jersey if Hill in facts slips this far.

Charlotte #12 Terence Williams: I have to site my sources on this one. After reading Chad Ford’s intel on his buzz page over at ESPN I’ve gone ahead and taken this pick from him (hell the man get’s paid to know his shit right?). I’ve had Gerald Henderson slotted here from the day he announced he was entering the draft. In fact I’ve had any player from Duke or North Carolina in this year’s draft here as well for back up. Apparently much has changed in the last week, and Williams has impressed everybody in Charlotte with his workouts and interviews. With rumors flying that Gerald Wallace is on the trading block, Williams maybe an ideal replacement, and makes more sense over Henderson who comes with questions marks.

Indiana #13 Ty Lawson: Unless somebody out of the blue falls to Indiana, the Pacers have said there looking to draft a point guard. Although Jeff Teague and Eric Maynor may have some more desirable upside, you can’t match the hard nosed, winning background of Lawson. He brings solid ability and ball handling, and an impressive resume of winning at the college level. He may not have some of the athletic flash NBA scouts covet, but you’re also not drafting a bust here either. Long term stability, and a productive NBA player isn’t a bad get at 13.

Phoenix #14 Gerald Henderson: Ugh, I’m not sure what Phoenix does here to be honest. There are a million different places that they can go, including the chance they move up the draft board or trade out of the first round entirely in a deal that includes Shaq getting shipped out town at the same time. If Phoenix is set on drafting completely on upside, Austin Daye from Gonzaga seems logical in the Sun’s system. In the end I think Henderson gets the nod, but nothing surprises me at this point if the Suns go a different direction.