A Spending Spree, Starring the Warriors?!?

When Peter Gruber and Joe Lacob bought the Warriors, it was a wait and see kind of deal in my mind. Being a Warriors fan over the past few decades you rarely know what direction they are going or if they even have a plan to begin with. It feels like the new owners DO have a game plan that we are finally seeing put together. Not a whole lot happened last year aside from them trading for David Lee during the off-season. At the end of this year, I figured I’d give them at least one more season to figure out how the NBA worked and what it takes to build a winner, then I’d start getting critical. I was pretty sure they weren’t planning on making big changes to the team since we are pretty close to the cap and won’t have money to sign a bunch of free agents heading into the lockout, but much sooner than I expected they made some big moves that really impressed me. They didn’t make a lot of moves that effect the on-court players, but in the front office we’ve been significantly strengthened, and seems to have some stability for the first time in god knows how long. All the moves led up to today where they bought a D-League team, the Dakota Wizards, and capped off an impressive pre-lockout flurry of moves that shook up our whole front office, and made Warriors fans like myself believe that the owners aren’t the cheap bastard we used to have.

Their first major move was hiring on Jerry West as our main consultant. I’m sure he didn’t come to Oakland cheap. It ultimately gave the organization instant credibility, and an amazing sound board to bounce ideas off. Their second move was hiring Mark Jackson to man the bench. Not positive if he’s going to be a great coach, but he seems like he’d be great at teaching Curry and Ellis how to manage games better, and be consummate professionals. I hope he’s the next Doc Rivers, but you never really can tell. I mean if you gave Doc Rivers the W’s roster, would he be able to bring them to glory? Probably not… Shortly after hiring Jackson, they acquired a top assistant in Mike Malone, who they somehow outbid the Lakers on. Does that mean he didn’t get along with Mike Brown during his time in Cleveland? I dunno, I guess you’d have to ask him.

Fast forward to the draft last week. It’s been awhile since we had a draft that didn’t have one mind boggling decision in it. Our picks made sense. Our previous owner would sell our picks for cash from time to time, which is why this years draft was so surprising. They actually bought the rights to Jeremy Tyler the 39th pick for $2M (a huge project that could be nothing or could be an All-Star), but the fact that they were spending money instead of just trying to make money during the draft was amazing to this longtime Warriors fan.

Today it was reported that they bought the D-League franchise, the Dakota Wizards. It seems like a great move, because the Warriors seem to be calling up D-Leaguers more than any other team, and have been very successful in doing so! They are now one of only four teams that have a “farm system”. Seems like a perfect place to let Tyler develop into a player, right? It will also keep Jeremy Lin busy instead of riding the bench in Oakland. Now they can sign players that they just want to look at. With access to their own team in the D-League that team can be run with the same concepts as the pro team, which will help them immensely when players are called up to the NBA because of injury or a player X sucking. They also can groom coaches whether they are assistants or head coaches. The team won’t be moving to Northern California until after the upcoming season, and if the Kings move, maybe  PowerBalance Pavilion wouldn’t be a bad site for the team!

Not completely lost amidst the Warriors near melt down, was the introduction of new owners Joe Lacob and Peter Guber to the Bay Area public.  Their speeches were short, sweet and simple.  But the impression left was meaningful.  Yes, there’s still plenty of season left, and although a 7-4 record looks, and feels good now, there hasn’t been a 7-4 team to make the playoffs in NBA history.  We play 82 games.  It’s uncertain how the rest of the season will play out, but we Warrior fans have got to appreciate the new energy that’s surrounding our organization.

It’s easy to give credit to Keith Smart.  And he deserves it.  He’s so definitive in his demeanor that he even sways me, the harshest critic, into believing that what ever decision he made was the right one, despite the results.  He’s a true leader on the sidelines.  Credit could, and should be given to the new Monta Ellis.  His attitude has been nothing but positive since getting married.  His maturity has risen to the point that you forget that he’s only 25.  He’s still a kid himself, but he’s ready to be the older brother on this young squad.  But I can’t help but think that all this positive energy must have started up top.  The very top.

Joe Lacob has experienced winning at the highest level with the Celtics.  And now he brings that tradition, and that winning formula to what he calls, a great market.  He’s correct.  His first words to Warriors’ fans, “You are the best fans …”

Someone knows how to butter us up.  But it’s true.  Unlike other sports teams in the Bay, or anywhere for that matter, it’s hard to point out a fair weather Warrior fan.  Or a bandwagoner.  I’ve been going to Warriors games for over 16 years, and from 1994 to 2010, the Dubs have been selling out, or at least coming close to it.  I could be wrong, but one things for sure, the arena never felt empty, even when we were losing.  And now we have owners who want to reward us for our loyalty and commitment.  I can’t wait for these next few years, because I don’t feel stupid for expecting great things.

So on behalf of all Warrior faithful, we just want to welcome Joe Lacob and Peter Guber to the Bay, officially.  And thank you, ahead of time.

Warriors Have a New Savior? 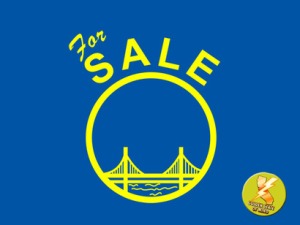 I think I’ve been waiting to write this post since before we even started this blog. FINALLY it’s been reported that the Warriors have a new owner, and shockingly it’s not Oracle founding billionaire, Larry Ellison. Instead it’s Joseph Lacob who is currently a partial owner of the Boston Celtics that teamed up with Peter Gruber of the Mandalay Entertainment to outbid Larry Ellison to the tune of $450M. He will have to sell off his stake with the Celtics, but that’s a mere formality. It’s going to be approved by the league since Lacob already has a stake in another NBA franchise.

Aside from that magical 2007 season there wasn’t much to cheer about over the years. The Warriors made a habit out of trading away talent for poo poo platters, and suffered through watching disgruntled employees/players argue with management about any topic you could think of from winning to contracts to injuries. I’m truly glad the former owner Chris Cohan owed the IRS about $160M in unpaid taxes or this may never have happened! Alas, here we are about to finally begin a new era in the Bay Area. An era where the owner hopefully cares about the team winning! Lacob will have a very low bar to raise, and with a great fanbase already in place ready to praise his every move, I’m positive he can’t get as many things wrong as the previous regime. I’m somewhat sad that Ellison didn’t outbid Lacob, but in the end, as we saw with Prokhorov being a billionaire owner doesn’t mean guys will just flock to your team. I’m still shocked that Ellison didn’t oubid them, since he’s worth $28 billion, and reportedly there was a difference of $20-$50M differnce in the bids, which is less than a percent of his total worth. I guess it was rumored he did not want to overpay Cohan and reward him with a failure bonus. Either way I couldn’t be more extatic that this has all come to an fruition, and we actually have a future to look forward to.

Next up: Make a pitch to Kevin Pritchard to be our GM, and fire lame duck coach Don Nelson. I don’t hate Nellie or anything, but we all know how he rolls in his last year of a contract. If you forgot, just ask any Dallas fan!