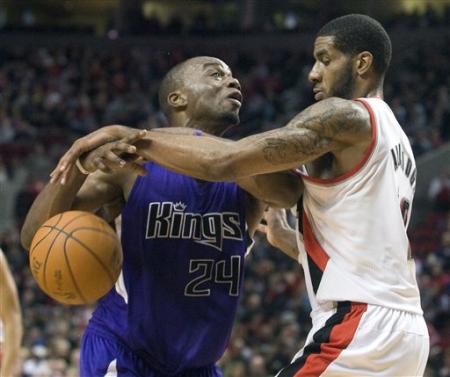 ….And I don’t mean trade him, I mean play him. Coach Paul Westphal has played Landry just 9 and 19 minutes in each of the last two games. They’ve both been losses. I know that doesn’t say much since 37 of the 49 games the Kings have played have been losses, but here’s a more significant trend for you….

Since January started, the Kings are 5-1 when Carl Landry plays more than 30 minutes. When he doesn’t, they’re 1-13.

I’m all for giving rookie Demarcus Cousins the minutes, and Samuel Dalembert’s been playing some solid basketball this year, but Landry should be on the floor more. It’s not like he can’t play with those guys. Jason Thompson should be the odd man out – which he is often. Whatever the case, it’s clear the organization doesn’t see Landry as a part of their future, which is unfortunate, so they may as well trade him to someone who will utilize him. This is a guy who was putting up 16 pts a night for a .500 ballclub in Houston, making him a favorite for the 6th Man of the Year award for the first half of last season. Now he’s not good enough to play for the worst team outside of Cuyahoga County, Ohio.

Let's Go Oakland....clap, clap, clap clap clap END_OF_DOCUMENT_TOKEN_TO_BE_REPLACED
This entry was posted on Saturday, February 12th, 2011 at 8:35 am and tagged with carl landry, nba trade deadline, sacramento kings and posted in Sports. You can follow any responses to this entry through the RSS 2.0 feed.
« Wow, I Didn’t Think I’d Care About That
Great NBA Playoff Moments »