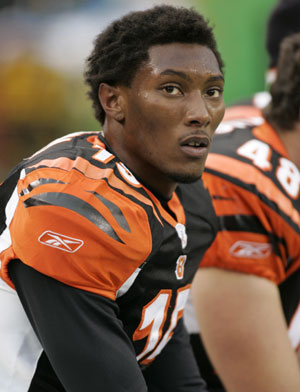 I can’t say I know a lot about the guy, except he was suspended numerous times by the NFL for his off field conduct. It’s sad that Chris Henry didn’t make it through the pick up truck accident. I guess I’m curious what led to him being shirtless and banging on the back of the Ford F150’s windows. Here are the 911 calls on Henry last moments before and after the accident. It sounds like there’s a lot more to this story that hasn’t come out, so we’ll see how it develops. Doin Work wishes the best for your family and friends Chris!

I'm a dude that just hit 30 years old. Pretty much like everything that is funny, insightful, and has to do with the Warriors, A's, and Raiders. END_OF_DOCUMENT_TOKEN_TO_BE_REPLACED
This entry was posted on Thursday, December 17th, 2009 at 2:25 pm and tagged with 911 call, arrests, Car Accident, Chris Henry, Cincinnati Bengals, domestic dispute, football, Ford F150, NFL, tapes, truck, wide reciever and posted in Sports. You can follow any responses to this entry through the RSS 2.0 feed.
« Diggin In The Crates: Chappy’s Star Search Audition Tape
Doin Lines Week 15 »